One year ago, a normally dysfunctional love story between two guys heralded an unmet demand for heroes.  The buddy love story I’m referring to is a less conspicuous success, The Life of Pi.  An introverted Indian boy had just suffered a tragedy that would make most people just give up and die.

Pi Patel wouldn’t have stood a chance of surviving adrift in the ocean under normal circumstances, but hungry tiger Richard Parker had to be dealt with.  The introvert hero tames the tiger, finds his voice and conquers the real antagonist: living a human life.  It’s rather painful.

A year later, replace Pi Patel with Ryan Stone, Richard Parker with George Clooney, and you get Gravity.  The introverted hero fighting to survive when there’s really nothing left to live for remained the same and the demand for such a story doubled.

Like Pi and Stone, Katniss is the very picture of the exhausted employee slumped over her tragic paycheck living in a dystopia where company savings plans turn out to be cruel robbery schemes.

It’s not that Katniss, Pi and Ryan simply mirror and turnout demographics different from the teen male box office ruling class.  Our new heroes finally understand what we’re going through.  Their values and spirit serve the principal psychological function of the hero archetype, a person who fits the times and inspire through empathy.

But wait a minute, what of Thor: The Dark World?  Well, early in the film, we see wise mom Rene Russo visiting psycho son Loki in his prison cell.  Meanwhile, fearsome father, Anthony Hopkins, has Loki chained before his throne for their weekly visit. 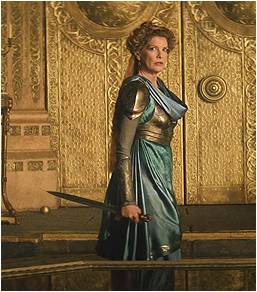 Naturally, Thor’s a lot more like mom these days. And it doesn’t hurt that his little brother works in the coal mines of District 12.