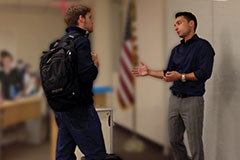 Darren teaching at NYU as an Adjunct Professor in the Entertainment, Media and Technology program at NYU Stern School of Business.

Darren Campo is a producer and media executive, author and university professor.

As a media executive…
Darren has overseen programming, development and production for several networks, including Food Network and Cooking Channel as head of programming and content strategy; TruTV and Court TV as Senior Vice President Programming, Production and Development ; CBS Television Stations as Program Manager. Darren led the programming team for TimeWarner in the creation of TruTV, has overseen production, development, licensing and scheduling for hundreds of shows, from the nationally syndicated Judge Judy and Cops to the network defining Forensic Files and Impractical Jokers.

As a professor of media and technology…
Darren is as an Adjunct Professor in the Entertainment, Media and Technology program at the NYU Stern School of Business, where he teaches “The Business of Producing.” He frequently speaks to media companies on the business and art of storytelling for the global audience.